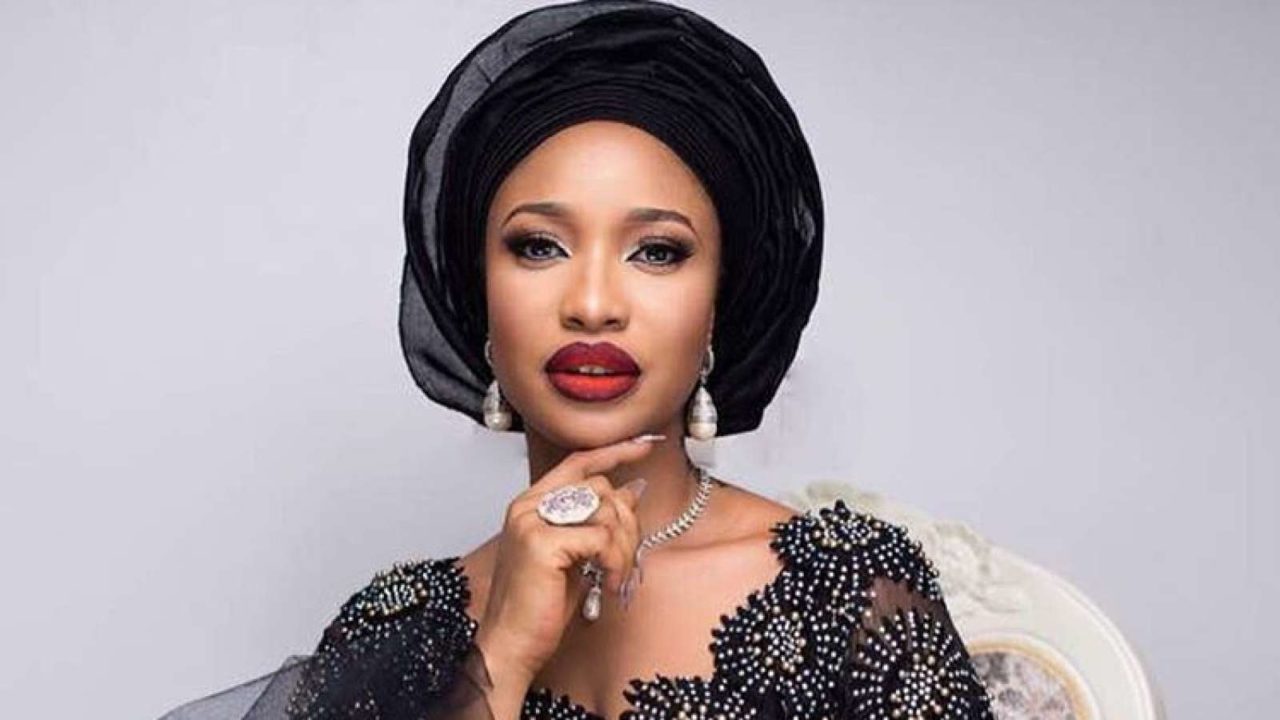 Nollywood actress Tonto Dikeh has announced that she is the running mate to the governorship candidate of the African Democratic Congress (ADC) Rivers State, Tonte Ibraye for the 2023 election.

“I thank Mr. Tonte Ibraye the Governorship Candidate of the African Democratic Congress (ADC) Rivers State for nominating me as his running mate,” Tonto Dikeh said in an Instagram post.

“We are looking forward to investing massively in social protection, creating a social value system for young people, increasing women’s inclusion in our governance system, supporting small businesses and strengthening our traditional institutions to be active players in the drive to bring sustainable development to the good people of Rivers State.

“I am glad to be a proud member of the #RiversRescueMission2023 Please get your PVC and join the movement. You are the Future and The future is now!TonteTonto2023.”

Ibraye won the ADC governorship ticket during the primary elections in early June.

Ibraye, an advocate for maternal, newborn, and child health, polled 187 votes out of 188 votes.

A representative of the Independent National Electoral Commission (INEC), Emmanuel Isong, who monitored the exercise, described it as free and fair.

Ibraye called for full implementation of the Electoral Act in all processes leading to the general election, especially the enforcement of the provision for electronic transmission of results during the poll.

Addressing the delegates, he said: “One thing I must tell you is that, you have made history today. It will no longer be business as usual.”

“I believe some of you are aware some people will contest and they go to the ruling party to endorse them. I must assure you that I will not use your votes to trade with anyone.”

OBI, KWANKWASO YET TO AGREE ON PRESIDENTIAL CANDIDATE, RUNNING MATE Youths of Independence Layout, Enugu, yesterday, visited Governor Ifeanyi Ugwuanyi at the Government House, Enugu, to appreciate him for entrenching peace and good governance in the state.

The youths equally applauded Gov. Ugwuanyi for the numerous road projects his administration has executed in Independence Layout, Enugu, stressing that no past administration paid special attention to the area the way he (Ugwuanyi) has done so far.

They threw their weight behind Gov. Ugwuanyi, who is the candidate of the Peoples Democratic Party (PDP) for Enugu North Senatorial District, the PDP governorship candidate in the state, Barr. Peter Ndubuisi Mbah and other candidates of the party, stressing that they will work tirelessly for their victories when the time for electioneering comes.

Speaking, the leader of the group, Solomom Nnaemeka Nwobodo, told Gov. Ugwuanyi that “the way Independence Layout is now, is not how it was before,” adding: “You built for us Valley Crescent, Mount Drive, Link Road, Ukehe Street, Isi-Uzo street, Ugwuoba Street, Nwafia Street, Ibuza Street, Holy Trinity-Bishop Michael Eneje Street, among others.

“Your Excellency, you recruited the people from the Ministry of Transport, MOT, (Traffic Enforcement Bureau Cadets) to control traffic in Enugu city. During past governments, there was traffic gridlock in Enugu, but now the MOT controls everywhere making sure every place is free from traffic congestion.

“As if that is not enough, you established for us Forest Guards and Neighbourhood Watch groups and gave maximum support to the security agencies to discharge their duties effectively. And there is peace and security in Enugu today that we now sleep with our two eyes closed, among other numerous achievements.

“Your Excellency, you brought an open door policy to your government. You have given our youths, our mothers and our fathers the opportunity to participate in politics and most of them have achieved their political aspirations. “We say we should come and thank you and promise you that come 2023, we will support you to go to the Senate because some of us cast our votes in Nsukka.

“We are also promising you that we are solidly behind Barr. Peter Mbah, to be your successor in 2023. All of us are for the PDP and by the special grace of God, Independence Layout has never lost any election since 1999.

“Your Excellency, thank you once again for uniting the indigenes of Enugu State through the PDP by accommodating everybody, and anybody who comes to the Government House. Our motto is talk to who you know in your polling unit and ward to make sure that PDP wins come 2023. Always count on our unalloyed support and solidity, sir.” Governors elected on the platform of the People’s Democratic Party (PDP) as well as other stakeholders of the party are currently divided over the continuous stay in office of the party’s National Chairman, Senator Iyorchia Ayu.

While some are insisting that Ayu should step down as party chairman, given the emergence of Alhaji Atiku Abubakar, a Northerner, as the party’s flag bearer in next year’s Presidential election, some others are of the view that even if Ayu should step down, it should not be now to avoid a crisis that might rock the political boat of the party and lead to its defeat in the election.

Saturday Sun gathered that the festering crisis has polarised the PDP Governors Forum, as well as other organs of the opposition party, including the National Working Committee. The governors, it was gathered, are sharply divided over the alleged push by the Governor Nyesom Wike group for the replacement of the National Chairman as a pre-condition for reconciliation.

Sources said that the division in the governors’ forum is such that it is affecting the cohesion of the National Working Committee (NWC). All the members are said to owe allegiance to governors that facilitated their elections into the party’s organ.

It is also such that no meeting of the Governors’ Forum has held since June 16, when the party’s presidential candidate, Atiku Abubakar, chose Delta State governor, as his running mate for the 2023 polls, and thus precipitating the continuous calls for the removal of Ayu as national chairman.

Multiple sources told Saturday Sun that out of the 12 PDP governors (minus Wike), four are supporting Wike while seven are with Atiku/Ayu. One is said to be non-committal at the moment.

Those on the side of Wike include Seyi Makinde, Samuel Ortom, Ifeanyi Ugwuanyi and Okezie Ikpeazu of Oyo, Benue, Enugu and Abia states, respectively, while Okowa, Aminu Tambuwal, Ahmadu Fintiri, Darius Ishaku, Godwin Obaseki, Emmanuel Udom and Diri Douye of Delta, Sokoto, Adamawa, Taraba, Edo, Akwa Ibom and Bayelsa states are said to be backing Ayu and Atiku Abubakar. Governor Bala Mohammed of Bauchi is said to be on the fence.

But a source close to one of the governors said that despite the crisis rocking the party at the moment none of the actors was contemplating the party. A story had earlier quoted Wike as suing the party and Aminu Tambuwal over the result of the presidential primary. But speaking at the commissioning of the House of Assembly Quarters in Port Harcourt, yesterday Wike debunked the news report, adding that he was focused on delivering the dividends of democracy to the people of Rivers State.

He said: “People have called me that I went to court against Atiku Abubakar. I want to state categorically that I didn’t go to court. I just want to say it for Nigerians to know. If they lose election, nobody should call my name. I have told the candidate. If I wanted to go to court, I would have gone to court within two weeks. It is the candidate’s group that is doing all these things. Let the world hear. They are the ones plotting all these things, thinking they will spoil my name. We are supposed to be talking about winning an election.”

Atiku’s supporters are said to be urging the party leadership to move on with its preparations for the 2023 general elections, without the Wike’s camp in the event that the latter continues to maintain a hard stance in the reconciliation. However, Solomon Bob, a member of the House of Representatives from Rivers State, told Saturday Sun, in an interview that Wike  “wants nothing less than sincere, genuine and unscripted attempt to fully reconcile.”

He also implored Atiku to show commitment to the reconciliation process by mounting pressures on Ayu to step aside as national chairman.

However, the PDP National Publicity Secretary, Debo Ologunagba, told journalists, on Thursday night, that the party could not remove its National Chairman now, noting that the PDP would not want to go the 2023 polls with a divided house. The National Coordinating Council, NCC, of the Obi-dient Movement, has dissociated supporters of the Labour Party, LP, Presidential Candidate, Mr. Peter Obi, from fake news. They said that social media warriors of a desperate presidential candidate, who are allegedly being trained in Abuja were responsible for Ghanaian President’s fake advice to Asiwaju Bola Ahmed Tinubu to step down for Obi.

NCC Spokesman, Mr Danjuma Musa, in a statement said Obi has sustained issue-based  comments and his jittery opponents had resorted to fake news to fight him.

His words: “Peter Obi has single- handedly changed petty campaign strategy to an issue based one as it ought to be. “Nigerians have become more awakened, sensitized, informed, animated and determined to take back their Country from these hawks of darkness bedeviling our beloved country.

“I can confidently assure you that Nigerians are decisive in making sure that come 2023 Obi/Datti presidency is confirmed.

“The opposition seeing they have lost grounds in standing shoulder to Shoulder with this exceptional gift to Nigerians (Obi/Datti) have gone down to the mud to deploy dirty tricks to score cheap political points using fake news as their weapon.  “The most recent is the Facebook post written with the name of a supposed Peter Obi support group with the obvious intent to tarnish the good image of Peter Obi. The purported letter of the president of Ghana to the presidential candidate of the APC, Asiwaju Bola Ahmed Tinubu asking him to step down is false, fake and very cheap. “Among all the presidential candidates, Peter Obi has been proven to be not just the best, most reliable and most competent of them all, but also the most decorous and would never need to go this low asking an already defeated candidate to step down.”