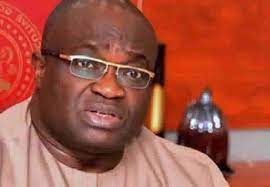 The Governor of Abia State, Okezie Ipkeazu has called on the federal government to immediately negotiate with Nnamdi Kanu to save the country from impending doom.

He spoke after visiting Kanu at the DSS custody where he is being held since he was arrested in Kenya and returned to the country some months back.

“We must engage with IPOB. Yes, we must find a way to talk about the issues at stake. These people are not as bad as the ones in the Northeast or Northwest who go to schools and seize the whole population of teachers and students or invade the mosques and churches and kidnap all the worshippers and nobody can find them until ransom is paid.

“At the earliest time, we thought IPOB was joking. Time has shown that they mean business. I am a governor, Nnamdi Kanu is a leader of IPOB with mass movement”. Nnamdi Kanu’s right must be protected because he is not a criminal.

“We the governors can’t stop IPOB because we don’t control the land any longer. Nigerian security is weak to deal with IPOB because of their determination. It’s time to negotiate with them.”

The community leaders in Nteje, Oyi Local Government Area of Anambra State, have called on Governor Chukwuma Soludo to save them from the incessant harassment and intimidation of indigenes allegedly by security operatives in the town.

They made the call on Friday in Awka at a news conference following the invasion of Nteje by suspected security operatives on Thursday.

The spokesman for the community, Mr. Martins Okechukwu, said seven persons, including the acting President-General of Nteje, Chief Benneth Chinweze, were seriously injured by the security operatives.

Okechukwu said, “Apart from our president-general, who is now lying critically ill in the hospital, one Oluebube Anukwu, who was among the seven persons that sustained gun shots is now dead, while five others are receiving treatments in different hospitals.

“Before now, Nteje has been a peaceful community, but in the past 10 years now, all that we are facing are incessant attacks and arrest of our people, who in some cases, are taken to Abuja where they suffer grievously.”

Okechukwu who blamed the ugly development on some natives mentioned one Chief Mike Nwakalor as the person fanning the crisis due to his interest in land grabbing activities.

He said that the Nteje community today has about four army checkpoints which some privileged individuals take undue advantage to harass the residents.

The acting President General of Nteje, Chief Benneth Chinweze, who spoke from his hospital bed in Awka, when our correspondent visited the hospital, said he had a harrowing experience in the hands of the security men on June 16.

“I was driving when, suddenly, some persons who all covered their faces double-crossed my vehicle and ordered me out.

“They forced me into their Hilux truck, tie my legs and hands and blindfolded me before they began to give me treatments like a common criminal.

“This incident took place on Thursday, June 16, but it was on Friday, June 17, that I regained consciousness in a hospital.

“As you can see, I cannot raise my two hands up or use them to eat and bath, I am just helpless here as you can see,” he said.

Chinweze who doubles as the regent of Nteje Community, added that he suspected that it was Chief Mike Nwakalor that was behind his ordeal.

”Before I lost consciousness, the people beating me kept saying, you always insult Chief Mike Nwakalor and if you don’t respect yourself, we will teach you bitter lesson,” he added.

When contacted, Chief Mike Nwakalor said he was not involved in the problem which occurred in Nteje on June 16 and do not have any hand in land grabbing activities in Nteje.

“As a community leader, I heard what happened and upon investigation I was told that Chief Chinweze wrote a petition and when security operatives came for him, he tried to evade arrest.

“I further gathered that those who were wounded by gun shots blocked security operatives and in the exchange of gun fire some of them got injured,” he said.

Nwakalor, however, explained that he was also not involved in any land dispute with any person in Nteje, saying, ”I have 200 plots of land between Nteje Park and Umunya and the property is not in dispute because I have my certificate of occupancy.”

Reacting, the state Police Public Relations Officer, DSP Tochukwu Ikenga, said that the command was not aware of the matter which occurred in Nteje on June 16.

He rather urged people of Nteje who were affected in the matter to come up with information that could help police in nipping the matter in the bud.

The Independent Corrupt Practices and Other Related Offences Commission

The Independent Corrupt Practices and Other Related Offences Commission has raided the Abuja home of a military contractor and seized N175,706,500; $220,965; G-Wagon; 2022 editions of BMW and Mercedes Benz cars.

ICPC arrested the Managing Director of K Salam Construction Company Nigeria Limited, Mr. Kabiru Sallau, said to be the owner of the property.

The anti-graft agency in a statement on Friday denied that the home belonged to a former Chief of Army Staff, Tukur Buratai.

The statement by the ICPC spokesperson, Azuka Ogaga read, “The Commission wishes to state that ICPC operatives raided a property in Wuse 2 of the Federal Capital Territory, Abuja, on Thursday, June 16, 2022, between 5:00 pm and 12:00 am in suspicion of money laundering. Facts available for the time being indicate that the property is owned by the owner of K Salam Construction Company, a military contractor.

“The Commission is yet to conclude its investigation and prefers not to preempt its outcome and also avoid the frenzy of a media trial.”

A former chairman of the Academic Staff Union of Universities, University of Port Harcourt Branch, Dr. Austen Sado, has described the call for the ban of the union as absurd and irrational.

A member of the National Caucus of the All Progressives Congress, Chief Sam Nkire, had asked the Federal Government to consider banning ASUU, alleging that the union had stifled the development of tertiary education and “trying to bring the government and the society to its knees.”

But Sado, who spoke in an interview with Saturday PUNCH on Thursday, expressed shock that a party leader could call for the prescription of a union as a result of a problem caused by the government.

Further describing Nkire’s act as an exhibition of ignorance, the former ASUU chief said Nkire’s statement showed the dilemma of leadership Nigerians had to endure.

“I am shocked to my marrow that a party leader could say this. To suggest that a way to solve a problem caused by the government’s irresponsibility is to ban a group of people that are asking the government to do the right thing is absurd.

“I have never been shocked by any exhibition of ignorance to that extent. That tells you the quality of leadership in Nigeria. It tells you the thinking behind our developmental quest.

“This person went to school and understands what is required to fund education, so that you can enhance and equip your people for developmental purposes, and you think that the way to achieve that is to silence a group of people that are holding you accountable to your irresponsibility. Nothing could be more absurd and irrational than that,” he said.