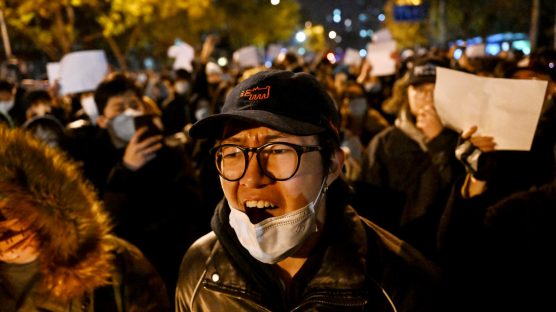 Protesters march along a street during a rally for the victims of a deadly fire as well as a protest against China’s harsh Covid-19 restrictions in Beijing on November 28, 2022. – A deadly fire on November 24, 2022 in Urumqi, the capital of northwest China’s Xinjiang region, has become a fresh catalyst for public anger, with many blaming Covid lockdowns for hampering rescue efforts, as hundreds of people took to the streets in China’s major cities on November 27, 2022 to protest against the country’s zero-Covid policy in a rare outpouring of public anger against the state. Authorities deny the claims. (Photo by Noel CELIS / AFP)

Hundreds of people took to the streets in China’s major cities on Sunday to protest against the country’s zero-Covid policy, in a rare outpouring of public anger against the state.

A deadly fire on Thursday in Urumqi, the capital of northwest China’s Xinjiang region, has become a fresh catalyst for public anger, with many blaming Covid lockdowns for hampering rescue efforts. Authorities deny the claims.

On Sunday night, at least 400 people gathered on the banks of a river in the capital Beijing for several hours, with some shouting: “We are all Xinjiang people! Go Chinese people!”

AFP reporters at the scene described the crowd singing the national anthem and listening to speeches, while on the other side of the canal bank, a line of police cars waited.

Cars honked in support as people remained in the area until the early hours, chanting and waving blank sheets of paper symbolising censorship.

Authorities blocked the road to stop cars passing, and around 100 plainclothes and police officers arrived on the scene.

At around 2:00 am (1800 GMT) they were joined by coaches of paramilitary police.

Eventually protesters agreed to leave after making officers promise their demands had been heard.

In downtown Shanghai — China’s biggest metropolis — AFP saw police clashing with groups of protesters, as officers tried to move people away from the site of an earlier demonstration on Wulumuqi street, named after the Mandarin for Urumqi.

Crowds that had gathered overnight — some of whom chanted “Xi Jinping, step down! CCP, step down!” — were dispersed by Sunday morning.

But in the afternoon, hundreds rallied in the same area with blank sheets of paper and flowers to hold what appeared to be a silent protest, an eyewitness told AFP.

Social media videos from the area that appeared to be taken in the late afternoon showed the crowd chanting.

By evening, dozens of policemen in yellow high-vis jackets formed a thick line, cordoning off the streets where the protests had taken place.

A foreigner who wished to remain anonymous told AFP he had seen a standoff as police directed a crowd away from Wulumuqi street.

“The police appeared to be looking for individuals suspected of leading the protests,” he said.

“Protesters directed their anger at the police and the party, using the ‘step down!’ refrain of the last few days.”

By midnight the area was calm, though swamped by hundreds of police officers and dozens of cars lining both sides of the road in some places.

Men in hard hats and overalls were erecting tall blue metal barriers on the sides of the street, cutting off the pavement. When asked why, they said they did not know.

In the central megacity of Wuhan, where the coronavirus first emerged, multiple livestreams that were quickly censored showed crowds walking through the streets cheering and filming on their phones.

Footage of protests allegedly taken in major cities Guangzhou and Chengdu was also spreading online Sunday night, but AFP was unable to independently verify the videos.

Earlier in the day, around 200 to 300 students rallied at Beijing’s elite Tsinghua University to protest against lockdowns, one witness who wished to remain anonymous told AFP.

A video that appeared to be taken in the same location showed students shouting, “Democracy and the rule of law, freedom of expression”, and was quickly taken down.

Other vigils took place overnight at universities across China, including one at Tsinghua’s neighbour Peking University, an undergraduate participant told AFP.

He said some anti-Covid slogans had been daubed on a wall in the university.

Some of the words echoed a banner that was hung over a Beijing bridge just before the Communist Party Congress in October.

“I heard people yelling: ‘No to Covid tests, yes to freedom!’,” he said, adding there were between 100 and 200 people there.

Videos on social media also showed a mass vigil at Nanjing Institute of Communications, with people holding lights and white sheets of paper.

Hashtags relating to the institute were censored on Weibo, and video platforms Duoyin and Kuaishou were scrubbed of footage.

China reported 39,506 domestic Covid-19 cases Sunday, a record high but tiny compared to caseloads in the West at the height of the pandemic.

The protests come against a backdrop of mounting public frustration over China’s zero-tolerance approach to the virus and follow sporadic rallies in other cities.

AFP verified the video by geolocating local landmarks but was unable to specify exactly when the protests occurred.

It is the latest in several high-profile cases where emergency services have been allegedly slowed down by Covid lockdowns.

The Qatar World Cup has also proved a flashpoint, as scenes of maskless fans provoked outrage on social media.

China’s state broadcaster has started cutting close-ups of supporters and replacing them with shots of officials or players.

BE MY RUNNING MATE, KANYE WEST ASKS TRUMP AHEAD OF 2024 ELECTION 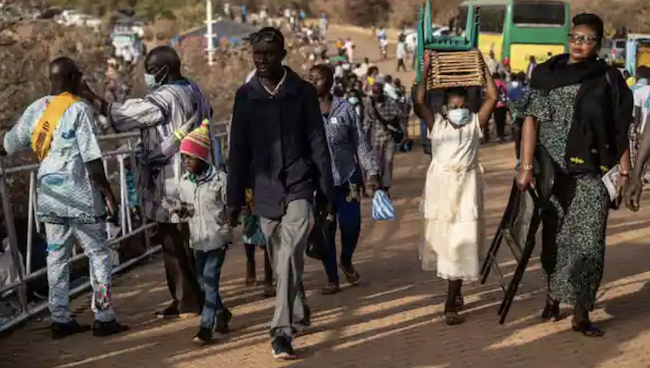 Burkina Faso has launched an investigation into the deaths of Nigerian Muslim pilgrims who were allegedly killed while travelling by bus to Senegal, foreign minister Olivia Rouamba said Monday.

The PUNCH had earlier reported that the President, Major General Muhammadu Buhari (retd.), condemned the killing of Nigerian pilgrims who were travelling to Kaolack, Senegal.

The incident had allegedly happened as the bus was passing through Burkina Faso.

During a meeting with the Nigerian ambassador, Mistura Abdulraheem, Rouamba assured that “investigations are opened to clarify the situation.”

“For the moment, no concrete information or evidence has been recorded on the ground that proves the veracity of the facts,” the minister said in a statement.

Rouamba added that Burkina Faso “fundamentally disapproves of the accusations made against our defence and security forces”, referring to allegations made about its army being responsible for the attack.

Burkina Faso is one of the poorest and most volatile countries in Africa.

Thousands of troops, police and civilians have been killed and around two million people have fled their homes since jihadists launched an insurgency from neighbouring Mali in 2015.

More than a third of the country lies beyond the control of the government, and frustration within the army at the mounting toll triggered two coups last year. 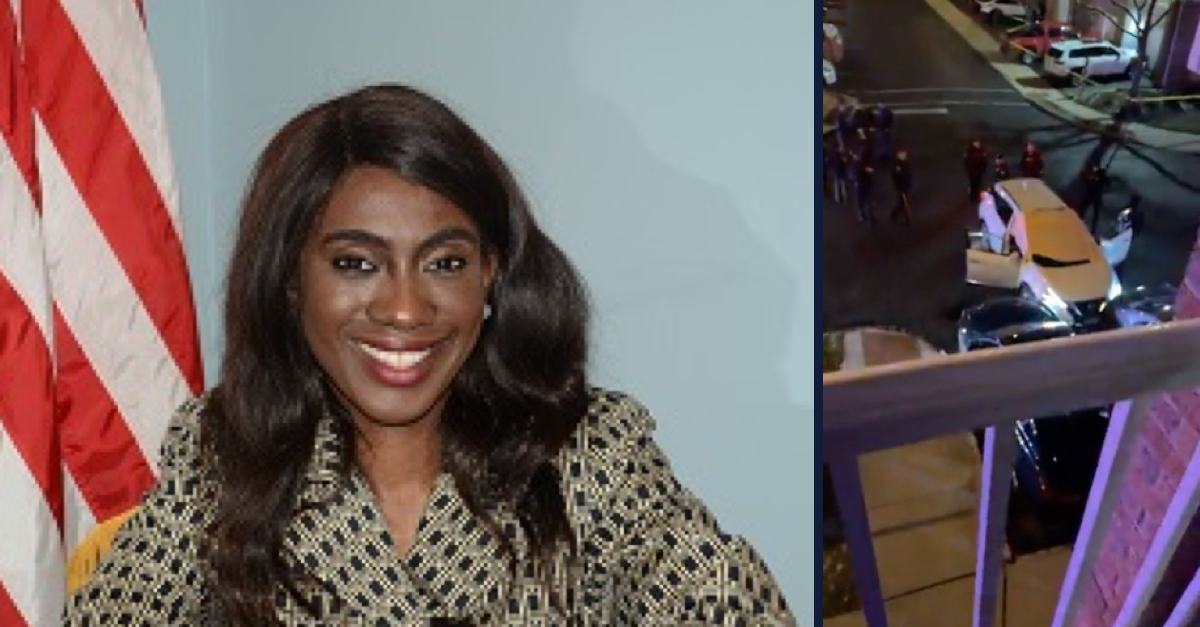 The Federal Bureau of Investigation and the New Jersey Police have embarked on a joint operation to unravel the mystery surrounding the death of a Republican Councilwoman, Eunice Dwumfour.

The New York Post reported that Dwumfour was shot dead in front of her home in New Jersey, United States of America, on Wednesday, February 1, 2023.

She was said to be the wife of a Nigeria-based pastor, Eze Kings.

Dwumfour, 30, was reportedly hit by a yet-to-be-identified assailant while driving around her home.

The white Nissan SUV she drove crashed into two parked cars before coming to a stop.

A male witness, who spoke on condition of anonymity, said her car was hit with about 12 shots while travelling down Check Avenue toward Samuel Circle around 7.15pm.

The vehicle eventually came to a stop after crashing into two parked cars, including the witness’ black Lexus GS350.

Chilling Snapchat footage of the aftermath of the incident showed Dwumfour’s body in the car while first responders surrounded the scene.

The witness said, “It took a second before I realised there was a dead body behind the wheel.

“She was slumped over the wheel with a black hoodie with brown fur covering her head; her hands were down by her side. There was one bullet hole in the passenger door and a bunch of bullet holes in the driver’s door. Some other neighbours said they saw someone running away with a mask on.”

Meanwhile, CBS News reported that the FBI on Friday joined the police in search of those responsible for Dwumfour’s death.

Investigators from the Middlesex County Prosecutor’s Office reportedly combed the woods behind the La Mur complex for clues.

Shortly after, investigators at the murder scene told reporters that Dwumfour was caught on video speaking to the shooter just moments before her death.

She also served as a Director of Churches for the Nigerian-based Champions Royal Assembly, according to her LinkedIn page, which touted her “bubbly personality, and strong work ethics.” 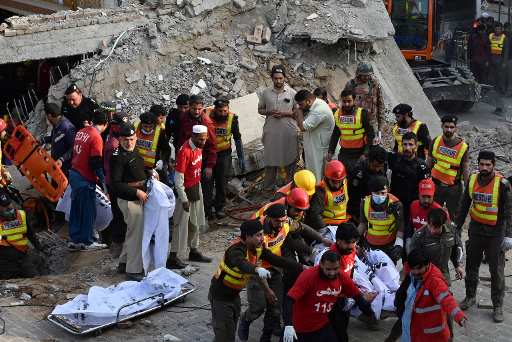 The United Nations Secretary General, Antonio Guterres and other top officials, have strongly condemned the suicide bombing at a mosque in Peshawar, Pakistan on Monday, that left at least 59 dead and 150 injured.

According to reports, a militant group had claimed responsibility for the attack, which occurred at the crowded mosque.

Reports showed that the bombing caused the roof to collapse on top of worshipers inside.

“It is particularly abhorrent that the attack occurred at a place of worship,” Guterres said in a statement issued by his spokesperson, Stephanie Dujarric.

“Freedom of religion or belief, including the ability to worship in peace and security, is a universal human right.”

Extending his condolences to the victims’ families and wishes for a prompt recovery to those injured, Guterres reiterated the solidarity of the United Nations with the government and people of Pakistan in their efforts to address terrorism and violent extremism.

Also condemning the attack, the High Representative for the United Nations Alliance of Civilisations, Miguel Ángel Moratinos, emphasised that all forms of violence and acts of terror against civilians and religious sites on account of their religion or belief, are intolerable and unjustifiable and should be unequivocally condemned.

“Houses of worship are sacred places where worshippers should be able to practice and declare their faith safely and freely,” he said, also expressing deep concern at the overall rise in instances of discrimination, intolerance and all acts of violence directed against members of any religion or other communities.

This includes incidents motivated by Islamophobia, anti-Semitism, Christianophobia and prejudices against persons of other religions, beliefs, gender or race.

Calling for mutual respect for all religions and faiths and for fostering a culture of fraternity and peace, he asked governments and other stakeholders to support the UN Plan of Action to safeguard religious sites, which had been developed by the alliance, at the request of the secretary-general.