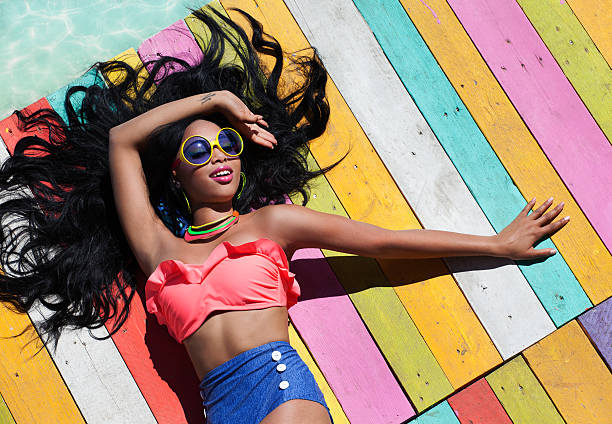 Today is beautiful. You are even more! WORDS AND SHOTS wishes you lots of delightful moments as you go about this beautiful day. Get inspired by the sunny smiles of our pretty model to bask in your many fine moments. Cheers! 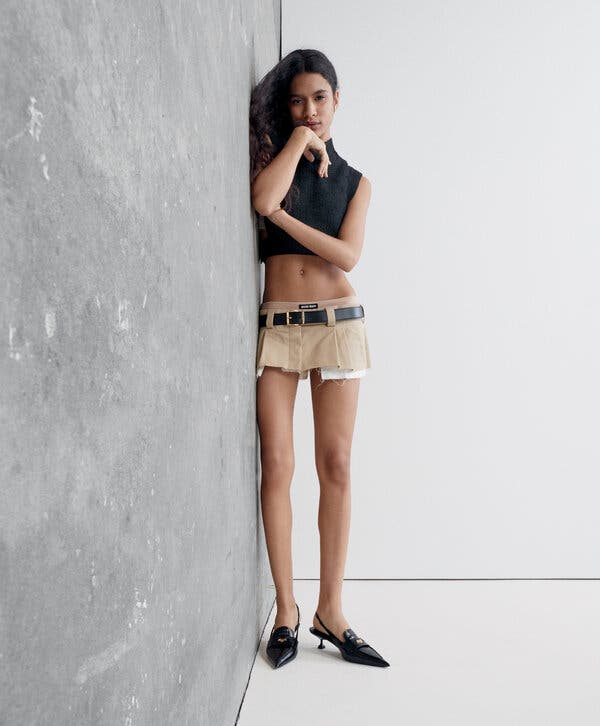 Hemlines are on the rise for spring, with leg-baring, ’90s-style minis that flare, slit and hug the hips.

Sign Up for the T List Newsletter  A weekly roundup of what the editors of T Magazine are noticing and coveting right now. Get it sent to your inbox.

CAN HUGO BOSS ACTUALLY BE COOL? 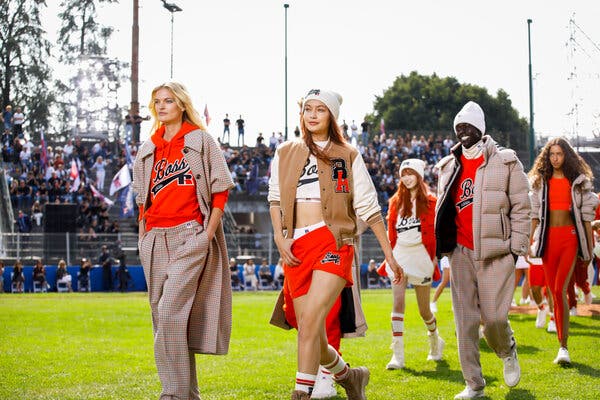 Gigi Hadid, center, walks in the Hugo Boss spring 2022 show in Milan — an ode to baseball, not suiting.Credit...Valerio Mezzanotti for The New York Times

The brand built by selling Wall Street suits is trying to reinvent itself for the post-office age.

It was fashion week, and the German brand, once a go-to for urban professionals dreaming of a steady climb to the corner office, cast its jackets and slacks to the side in favor of a baseball-themed spectacle. The model Gigi Hadid opened the show, held to debut Boss’s collaboration with Russell Athletic, the active wear brand, in high-waisted sweatpants and a beanie. There was a brass marching band and cheerleaders. The K-pop star Big Matthew made his modeling debut, and an anthropomorphic popcorn mascot danced.

It was, for anyone familiar with Hugo Boss’s usual slick Wall Street-ready offering, a tad unexpected.

It was also, it turns out, Stage 1 in what the company is calling a major rebrand that reaches fruition this week with new ad campaigns and a new look.

The old blocky logo has been replaced by new, sleeker typography. There is experimentation with repurposed materials. (Coming soon: suits constructed entirely out of recycled water bottles.) There are also ultra-breathable suits, fitting for dinner as much as the office, and elevated athleisure pieces reminiscent of 1990s street wear with a sophisticated twist. Punchy ad campaigns feature the model Hailey Bieber, the rapper Future, K-pop stars and TikTok influencers. Oh, and there will be a Hugo Boss-sponsored TikTok dance challenge, just like the viral 2020 dance renegade.

Yes, Hugo Boss is trying to recast itself as cool. Gen Z cool. Even in an industry where change is a given and brand reinvention is almost an annual occurrence, the attempted turnaround is extreme.

“For the past six to eight years the brand has just gotten a bit … dusty,” said Daniel Grieder, who was named chief executive of Hugo Boss last year. Mr. Grieder, 60, spoke from the company’s headquarters in Metzingen, Germany, over a video call, exuding the can-do air of a Silicon Valley founder — albeit one wearing a suit. He was sitting at a long table, flanked by two colleagues; they occasionally clarified or repeated questions for Mr. Grieder, who is from Switzerland and speaks German.

It’s easy to understand why. The company had a 33 percent decline in sales at the start of Covid, according to the brand’s 2020 annual report, its most recent.

Stock prices for Hugo Boss, have consistently fallen since June 2018, according to public records. “It was a dependable brand,” said Robert Burke, a retail expert who previously worked as a top executive at Bergdorf Goodman. “Men would go there and get two or three suits. And then it became too dependable.”

Suits themselves fell out of favor, victims of a longstanding trend toward casualization that accelerated during the pandemic, with its long stretches of working from home. Behemoths such as Goldman Sachs and the Federal Reserve Bank of New York adjusted or abandoned their formal dress codes. Cult brands such as Jerry Lorenzo’s Fear of God and Aimé Leon Dore, with their refined take on street wear, began to gain not only buzz but also critical market share. (The fashion conglomerate LVMH, owner of more than 70 prestigious brands, recently purchased a minority stake in Aimé.)

“Recency has become the new authenticity,” said Jian Deleon, the men’s fashion and editorial director at Nordstrom. “You can tell a lot of great heritage stories, but for a lot of younger shoppers, it’s more about what’s taking over their feeds. The Instagram Explore page and TikTok For You page are two of today’s biggest influencers.”

Mr. Grieder was hired in 2020 after 23 years as chief executive at Tommy Hilfiger Global, where he was credited with keeping the brand current through early adoptions of shoppable livestreams and Instagram filters. (Although, because of a noncompete agreement with Hilfiger, Mr. Grieder could not officially start his new role until last year.)

And although some industry watchers have speculated that the Hugo Boss rebrand is designed to make the publicly traded company a more attractive acquisition target, Mr. Grieder denied the suggestion. “If anything,” he said, “we’re looking to buy. Not sell.”

(This is not the first time the company has had to contend with image rehabilitation: Its namesake founder made uniform for the Nazis before and during World War II, for which the company has publicly apologized.)

Mr. Grieder’s new vision for Hugo Boss began with the creation of two distinct lines intended for different audiences. “Hugo” is a new street-wear-leaning option for Gen Z shoppers replete with bucket hats, loose-fit jeans and logo-heavy accessories. “Boss” is a line of minimalist, smart-casual looks aimed at millennials that includes earth-toned hoodies, voluminous overcoats and tailored chinos. Though this goes against the current trend for brand consolidations, as espoused by Burberry and Zegna, Mr. Grieder said the differentiation would help Hugo Boss stand out.

Then he signed up a slate of new brand ambassadors, focusing on internet-famous names, including the TikTok comedian Khaby Lame, 21, who went from factory worker to the second-most followed person on the app (his current follower count: more than 130 million). Others include the model Adut Akech, known for her activism around greater inclusivity in fashion, the South Korean star Lee Min-ho and the musician Saint Jhn, who has collaborated with Beyoncé and Kanye West.

Next, Mr. Grieder and the design team (there is no official “designer”) workshopped how to make their suits more appealing to their target shopper. “We want to be the first suit a millennial or Gen Z customer buys,” Mr. Grieder said, before beginning to wax lyrical about “the suit of tomorrow.”

He was wearing a “suit of tomorrow” as he spoke: a slim-fit cobalt number made from lightweight cotton, that, he said, was wrinkle resistant, water-repellent and, in his opinion, comfortable enough to sleep in. Then he performed a quick series of stretches — halfheartedly throwing his arms up — to show off the fabric’s elasticity.

“You could hike a mountain in this,” Mr. Grieder proclaimed, saying sales of suits for the brand recovered last summer, in tandem with scaled-back lockdown measures across the world. “People wanted to get dressed up and go to restaurants.”

(The “suit of tomorrow” will arrive in stores in “late January.”)

There are still some classic Hugo Boss elements amid these new clothes: European tailoring, preppy, billowy button-downs. (Mr. Grieder does not want to alienate the brand’s existing customers, who may find the new look somewhat startling.) But there are some forward-looking elements too. One standout comes from the Boss line, in the form of an oversize long-sleeve button-down-and-shorts set, available in an on-trend burnt orange. And women’s lounge shorts have the voluminous proportions of basketball shorts, flirting with androgyny.

Why is Mr. Grieder so convinced this is the way forward? Because, he said, he had a secret weapon: Gen Zers themselves.

Throughout the overhaul, Hugo Boss hired teenagers to work as consultants and assist on photo shoots. “Gen Zers are a rare commodity,” said Miah Sullivan, who oversees marketing and communications at Hugo Boss and is herself a millennial — though perhaps what is more true is that Gen Zers who want to engage with big brand executives on the subject of suiting are a rare commodity.

“I go to this Gen Z consultant — he has an agency, he’s 17, and a complete boss — and he gives me advice on how to execute, how to augment, how to change,” Ms. Sullivan said.

Sometimes the consultant, whom Ms. Sullivan declined to name, also helped the brand find other consultants.

Whether they will also be in Hugo Boss while on TikTok is now the question. The event was flooded by distinguished personalities/ captains of industries who came to witness the competition and crowning of the newly emerged Comely Queens who are Breast cancer Awareness Ambassadors.

According to a statement by the organisers, Queen Juliet Omoredo, the newly crowned Miss Comely Queen Nigeria battled the crown with 30 Beautiful Contestants and now she is expected to give voice to the fight against breast cancer in the country.

Other ceremonial crowns at the finale includes;