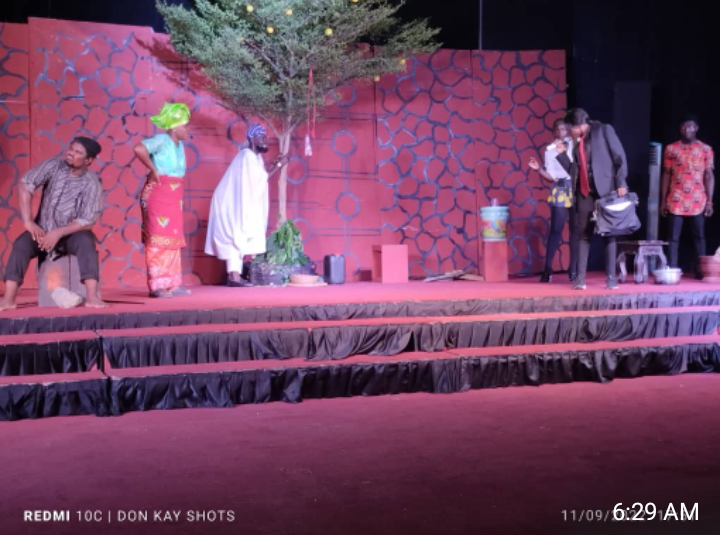 Scene from the play

The name Dan Kpodoh has deservedly etched himself as one of the proponents and vanguards of the renaissance of live theatre performance in the city of Port Harcourt and by necessary extension the Niger Delta region.

Through his Active Play House, Dan, a script writer, choreographer, artistic director, Festival curator and Event Manager, has produced and hosted with consistency performances in the last few years. Some of his productions which are usually laced with dance and music, include but not limited to; Bolobolo, _The Struggle_, Biokpo, _Unbroken_, _The gods are not to blame_, etc. His choice of scripts for productions reveals his artistic commitment to socio-economic reconstruction. Whereas he addressed the burning issue of domestic violence which I describe as the scourge of the marital space today in _Unbroken_, however, for the most part, Dan’s artistic endeavor tilts toward the ideological dramaturgy of the Osofisans and the Fatundes because evident in his thematic construct is the passion for the liberation of the Niger Delta from the shackles of depravity underdevelopment.

On Sunday, 11th September 2022, Dan Kpodoh took another giant stride with his cast and crew to bring to live theatre enthusiasts in Port Harcourt and environs, one of Ola Rotimi’s classics in the comedy genre; _Grip Am_.  For those not familiar with this very popular script, it is an adaption from vernacular into Nigeria Pidgin English by Ola Rotimi. For some it may have been nostalgic entering the auditorium and perhaps with an air of predictability (that feeling of knowing what to expect). But with dexterity and artistic license, Dan Kpodoh tweaked this comedy into a musical somewhat, suggesting that the present transition in theatre development in Nigeria into Musical Theatre is gradually becoming a norm.

The play started at 05:07 pm; 1 hour 37 minutes from the earlier advertised commencement of 3:30 pm, at the Arena Event Centre, Tombia Street, GRA, Port Harcourt. No thanks to the heavy downpour. The hall was half full; comprising mainly of theatre practitioners, who came to show solidarity and support for one of their own. The main show was preceded by rib cracking jokes by the duo of Angel the Laff (pioneer, Port Harcourt Comedy Club) and Kunle Tatafo (of the Funky Four). They both reeled out spontaneous jokes which relaxed and prepared the audience for what was to come; more laughter and entertainment.

The play opened with a Sunny Neji’s hit track, _Tolotolo_; incidentally that was the name of Alabo (the protagonist) and Warri’s neighbor. The director set the play in the Niger Delta, judging from the names of the protagonist and his wife; Alabo (played by Alfred Fadar Otite) and Warri (played by Favour Nabofa). Tolotolo (played Doubra Agwana) is depicted as a ‘been to’ character, in her speech, nuances and mannerism. But we would discover later that all was for show, she’s never been anywhere but her community. Whereas the Arena is proscenium in orientation, Dan from the outset was not pretentious about his avant-gardist approach to directing in the manner he broke the fourth-wall, introducing his first character on stage from the audience. That singular act created a tacit intercourse between the audience and the actors on stage.

In terms of content, the director made superfluous insertions of social issues, phrases, words, jokes and malapropism into the original dialogue, all in a bid to evoke laughter and indeed it resonated with the audience. So we heard issues like PVC and its importance to good governance going forward. Songs like _Enjoy_ by Tekno, Alpha Blondy’s _Sweet Fanta Diallo_, and of course ‘Carry me dey go, carry me dey go my father house’ (from a skit creation that has gone viral on social media), etc, were freely but appropriately used to the delight of an appreciative audience.

There were three entrances that were innovative for me; the first was that of the Angel (played by Olivia Chinwendu Onyeji) heralded by George Frederick Handel _Halleluyah Chorus_. The Angel appeared on stage spotting a medicated  glasses, when asked why, she replies that she doesn’t see correctly. That generated guffaw on stage and in the auditorium. The beggars’ entrance was equally exciting, though unexpected; it added fervor to the dramatic piece with its sonorous songs. However, the entrance of Death (played by Jessica Oluebube Sunday) was the show stopper. Death was introduced with his team, all clad in black and danced in unison to a parody version of Michael Jackson’s track, _Billie Jean_. It was a lively performance. The landlord (was played with panache by Dan Kpodoh). His interpretation of the role held the audience captive especially with his phrase uttered in Yoruba-English; ‘Nor dey S’out’ (shout). Deinmoara James Profit played the typical Ijaw woman’s role effectively too, accent and all. Wisdom Edet as Skiddo, the landlord’s son gave a good account of himself in the few moments he graced the stage. Overall, the acting was excellent.

Ultimately, this was a successful show performance wise. Although there were deliberate attempts at slapsticks by some actors to elicit laughter, it didn’t take anything from the general performance. Alabo (Alfred Fadar Otite) didn’t manage his voice properly, he was shouting in an attempt to project, even with a lapel mic. That was a disservice. If this play ran for 3 days, I doubt he would have retained his voice. Also, the actors played for the most part on the same plane Down Stage, that wasn’t good directorially, as it robbed the play of the needed depth. The Set was as simple as austere as it can be but was too neat like a new project about to be commissioned. The technical director could have aged it a little though. The costumes and make up and sound were on point. The play ended with Kizz Daniel’s anthem; _Buga_.

Like we have always advocated, we should be collaborating and not seen as competing with each other. We should support one another. To that extent, I salute Crabites who defied the rain to patronize one of us. It is okay to acknowledge Boma Kiri-Kalio who single handedly bought 20 or so tickets to share to friends. Also, Mr Yibo Koko, gave an open invite to every member of cast and crew of Seki to attend the show at his expense. Indeed Dan was enthralled by the solidarity.

In all, the feedback attests to the fact that the audience had value for their time and money. Congratulations to Dan Kpodoh, Cast and Crew of _Grip Am_, and the Active Play House on another successful outing.

Finally, thanks Dan for asking me to do this review. It reminds me of what I consider the best definition of a critic yet; “critics are like manure, they smell but you need them to grow”. Dan is one who is ready to grow, and grow he will. Afrobeats superstar singer, Daniel Benson ‘BNXN aka Buju’ has sparked excitement from fans by teasing an unreleased single ‘Traboski’, less than two months after the release of his sophomore EP ‘Bad Since 97’.

The talented singer made this known in a tweet on Sunday, 2nd October 2022 with the caption ‘So you get the drift 😂 TRABOSKI’ as many fans were excited about the teaser.

BNXN sang in his usual melodic tune with a catchy hook and record produced by Young Willis. 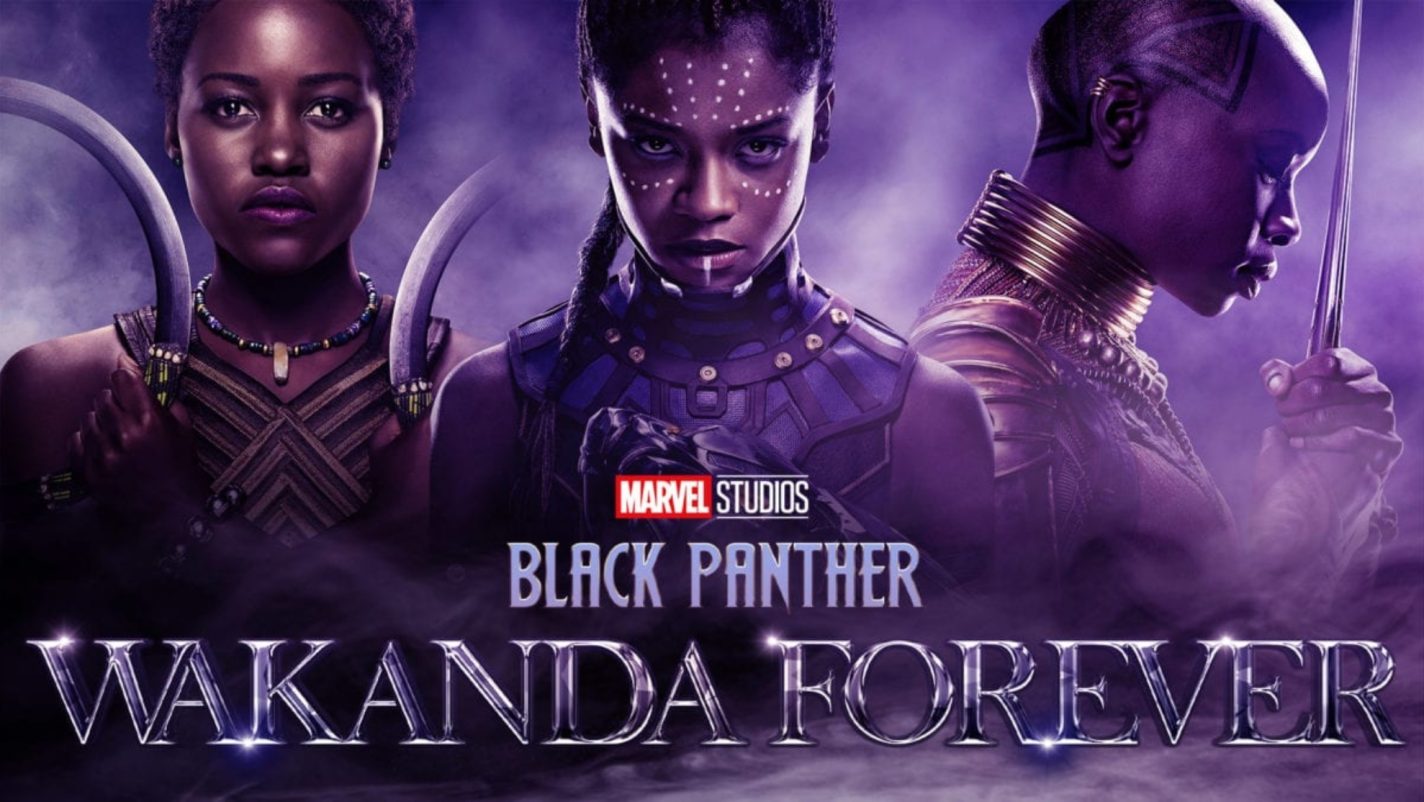 A sequel to its 2020 blockbuster “Black Panther” the new film tells the story of the Wakanda People in a world following the death of their beloved king T’Challa (Chadwick Boseman).

As revealed previously, Boseman’s character was not recast, rather the new film is considered to be a tribute to his legacy.

In the first teaser for the film, the words “The King lives and the Panther… forever in us…” are painted in Wakandan on a mural of T’Challa in Wakanda.

This picture looks to be part of a segment from the teaser that also includes Wakandans dancing and performing music while wearing white ceremonial clothing. Some fans of the just concluded television reality show, Big Brother Naija season 7, have commended the organisers for an entertaining and educating show.

The fans who spoke with the News Agency of Nigeria (NAN) on Monday in Lagos, gave divergent views of their assessment of the show, with some advice to improve on the next edition.

NAN reports that 25-year-old Josephina Otabor, known as Phyna, emerged the winner of the season 7 Level Up edition as she walked away with N100 million grand prize.

The grand prize comprises N50 million cash prize, a new SUV by Innoson Motors, a Dubai trip for two, a year supply of Pepsi, new techno phone-Camon 19, supply of Unik soap, and supply of home appliances from Nexus among other mouth-watering items.

Rachael Enem-Isaac, a presenter with Pulse Nigeria, described the show as entertaining and educating.

Enem-Isaac said that because the just concluded show was initially split into two level up houses, most fans lost interest in it, which accounted for the low viewership.

She said she also observed that the fans were not as engaging as the previous shows.

Enem-Isaac advised the organisers to take a break in 2023, which is the election year, to look into the loopholes, get feedbacks from fans and design ways of improving on the show.

She said since plans were already on ground to merge Nigerian and South African housemates for the next edition, this must be thoroughly planned to present a great show.

“I advise that the organisers take a break in 2023, engage in working on the feedbacks gotten from fans, let 2023 be the election year so that the youth are not distracted from politics and come back in 2024 to present a great show,” she said.

According to a Chinese national, Kelly Lin, Marketing Officer for Oraimo, the show was loaded with vibes, real energy and series of drama which made it interesting compared to the previous editions.

Lin urged corporate organisations to come up with similar shows that will project Nigerian culture, artistes and fashion designers.

She said the show also tried to engage the youth positively in view of the challenge of unemployment experienced in the country.

Also, Uche Adigwe, an electrician, advised the organisers of the show to ensure that the housemates’ privacy was respected by earmarking different rooms for the male and female housemates.

He said this was to create some sanity and decency in the show.

Amanda Pelemo, a businesswoman, said she observed that the just concluded show had more sponsors than the previous editions which made it loaded with fun as each sponsor came up with series of games and tasks for the housemates.

Pelemo commended the process of auditioning for the show which revealed that the housemates were younger and real.

She advised that in subsequent editions, a single house should be maintained as against two houses.

According to her, the initial idea of two houses affected the viewership of the show. (NAN)